This morning I read an article from yesterday’s Guardian about living organ donors – the photo of the two brothers, Garyn and Gethyn George, speaks volumes. I’m not going to paraphrase the article but it’s well worth a read (although if you’re as soft as me you might need a tissue by the end)! 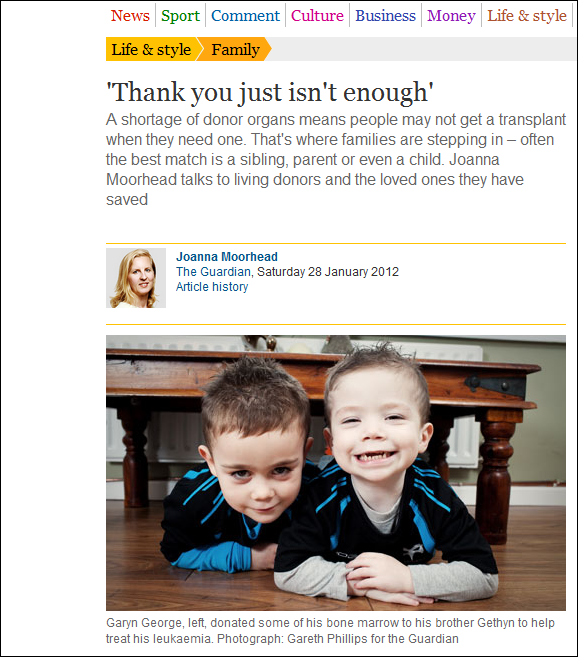 At Christmas I watched a documentary I’d recorded back in October, called Transplant. It portrayed the story of how a single organ donor, Penny, changed the life of so many others. Penny was 65 years old when she was admitted to St George’s Hospital in London having had a brain haemorrhage. There are age restrictions in place on certain organs, for example you need to be 65 or under to donate a heart, but kidneys can be used at any age. Cyril, Penny’s husband, talked in the documentary about Penny’s belief that organs were leant to you, she felt that if they could be used after death then they had to be.

The pain of the grief that Penny’s husband and daughter are experiencing was palpable in the documentary, I really felt for them. The documentary also spoke to several of the organ recipients, and their family members. The gift Penny gave has transformed their lives in a way that I don’t know many of us ever will. The wife of one man who received Penny’s liver spoke of her emotions as a mix of excitement, terror, guilt and fear. He went on to make a full recovery. The take away message from this documentary, and from reading the article yesterday, is that more people need to donate their organs and need to make it clear that they wish to do so.

Most people support organ donation in principle, but approximately 40% of families still decide not to donate their loved ones organs at the time of death – even if they have expressed their wish to donate, and in some cases are on the donor register. I was struck by how determined and confident Penny’s husband and daughter were in her wishes, it seemed to make their decision much easier, in fact it wasn’t their decision and they were clear on that.

One of the things I hear most when discussing organ donation with friends, is the concern that they wouldn’t be buried or cremated whole. I understand that for some people this is a real concern, for me it’s less of one and one of my favourite moments in the documentary was when Penny’s daughter explained:

If you’ve not thought about organ donation, take the time, even if you decide you don’t want to at least you will have made an active choice. If, like me, you wish for your organs to be recycled then you need to make it explicitly clear to your family that you want that to happen, it makes it easier for them and significantly increases the chance that you can transform or save someone’s life.

To find out more about joining the donor register visit the NHS Blood and Transplant service site here. To hear about my Dad’s experience of a blood transfusion, in case you’d like some inspiration for giving blood you can read an old post here.

One thought on “The ultimate recycling?”