April has felt like a long month, the reality of course is that is all perception, it’s actually only 30 days and I’ve been away for a significant chunk of it, which has perhaps stretched it’s length in my mind. I blogged at the start of the month about Dad’s latest treatment (blood transfusions and chemotherapy) for managing his cancer. At the time I expressed my concern that I was travelling a bit in April and would be away from home if anything happened. The professionals had predicted that if Dad was likely to have an adverse reaction to his chemotherapy it would happen over Easter weekend – sure enough they were right with the expected response, and almost precise on the timings, Easter came and went in an unremarkable fashion and Dad was admitted to our local hospital on the Tuesday that followed. He had an infection, it wasn’t clear what sort or how to manage it, but he was kept in isolation and looked after until he was stabilised.

The weekend that followed I had the absolute pleasure of a weekend in Bonny Scotland. Great idea, lonnnng way. Up to Scotland on the Friday and back on the Monday. I visited Dad on the Thursday evening and he was crystal clear that I had to go, and that my life couldn’t be put on hold for his. He was sent home that weekend and I had a great time away, helped in some part due to my complete lack of mobile signal so I didn’t keep checking my phone for missed calls or texts, which was a welcome relief in itself.

The following week I was working away (at ADASS Spring Seminar) from the Wednesday – Friday. Dad had already had his second course of chemo cancelled given his initial reaction, but seemed to be picking up when I saw him that Tuesday evening. Dad and Mum had an appointment with his oncologist (only the second scheduled appointment I’ve missed since Dad was diagnosed over 4.5 years ago) on the Thursday of that week and he surpassed their expectations again – he appeared to be making a remarkable recovery, his internal bleed and blood loss seemed to have slowed down and he was feeling a lot better. As Mum described it this evening, they had a taste of normality – he was even able to take their dog for a walk on the beach, the first time he has been well enough to do that in months. 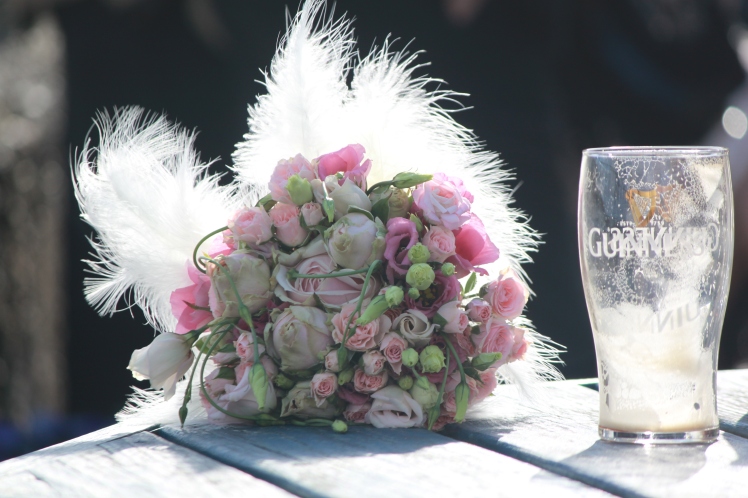 The weekend that followed I flew to Ireland for a conference (#EIPIreland) for three days and then stayed on in Ireland for a friend’s wedding this last weekend. On Thursday I got the text I’d been dreading from Mum that said Dad was being admitted to hospital by ambulance for transfusion asap. I’ll spare you the details, mostly because they’re completely inconclusive, but it looks like Dad’s body is struggling to cope – what’s not clear is whether that’s because he was too anaemic for the chemo, or whether it’s a result of the chemo, or indeed whether it’s because his body is slowly starting to shut down, or given Dad’s unique trajectory with this illness to date whether it’s something altogether different.

Having had a week away, I went straight to the hospital on my return yesterday (incredibly grateful that I was back on home soil, Dad hadn’t died while I was away and that my brother had come down to support Mum in my absence) and was gob smacked by how exhausted both my parents looked. It was only a week since they were walking the dog on the beach in the sun – not that you’d have thought as much if you’d seen them. I felt a huge responsibility, not that I could have done anything differently, but I felt like I’d left them to deal with things, and they looked like they’d paid the price for that.

Just about the only thing that is clear this evening is that the bed Dad had in the local hospital was needed for someone else, he was growing increasingly agitated and exhausted with trying to understand the system/decisions/information, and he was being discharged irrespective of the knowns or unknowns. It’s been quite an immersion, not that I ever really escaped it on my week away, but it’s a real reality check as I sit on their sofa banging the keys trying to make sense of it, or share the lack of sense in it with you (assuming as the eternal optimist I am that someone has read this far), and think about how all encompassing living with not knowing is. There are so many unknowns and so little certainty, the immediate reflection is that it can feel overwhelming at times. It’s like a constant faulty rollercoaster ride that you can’t get off, occasionally it slows, in fact sometimes it stops just long enough for you to feel rational/balanced/normal again then it’s like it flies off again, throwing any sense of equilibrium out the side of the ride with you.

There are loads of immediate questions we have, the most immediate include whether Dad will need to stay on the new drugs he’s been given in hospital this time or change again; will he have a PICC line inserted after 11 failed attempts to insert a cannula at the weekend; will his chemo be continued; how long can he cope with the constant intervention; how long can the NHS afford to provide intervention/blood/chemo; whose advice should we take and/0r who should we ask questions of. That may give you a smidgen of a sense of the level of not known.

Then of course there is a continual, constant balancing act of making the right call around priorities in life. The hard thing about knowing someone you love is terminally ill is that it provides a lens of constant reflection, every decision (if you allow it) could take on a significance of monumental proportions. Well maybe I’m being a little dramatic, perhaps not every decision, cocopops or muesli for breakfast shouldn’t have a massive effect, but knowing whether to visit tonight or wait until tomorrow could.

My colleagues have been constantly supportive, encouraging me to take what time I need, the reality is that I don’t know. If I take time now is it an indulgence, will it scare Dad into thinking I think he’s dying (and put him in a negative mental place that suggests I don’t believe he’ll live much longer), will it just put other elements of my life under more pressure in the long run, will it just add to the pressure that my folks are already under, if there is one thing I have learnt it’s that multiple people hanging around and waiting to understand the vagaries of the NHS is not a good use of their time and definitely puts your already strained relationships under more pressure.

Likewise people have offered to help in any way they can, the reality is I don’t want to call on people’s offers of support now unless I really need it because I don’t know if we’ll need it more later, it’s a bit like the boy who cried wolf I suppose – it’s impossible to know what the future holds so you just have to juggle the unknown and hope you make the right call. I’m not really sure where I’m going with this post, in fact I might not even publish it because it feels like a lot of rant with not much purpose, an almost indulgence (the worst kind of blog post). That said if this goes any small way to share the experience with anyone else then maybe that’s no bad thing. It’s really exhausting constantly living with an awareness of the unknown…the huge irony of cause is that we all live in this existence every day, even if we don’t recognise or realise it.

3 thoughts on “The cancer rollercoaster: living with the unknown”