Unless you are living in a cave, there is a good chance that you will know that the 30th Olympiad, London 2012, opened in a spectacular ceremony on Friday night. I’ll not talk about that, there are some excellent reviews about it online, my Mum’s take was that it was ‘fantastic but too long’, my Gran wanted to see more of the Queen and went to bed after the first hour, I watched it yesterday and loved it.

I’m not quite sure why but I really like the Presidenti of the IOC, Jacques Rogge. He reminds me of a friendly grandfather figure and he is often giving sound advice. His gem from the Opening Ceremony was this:

‘And to the athletes I offer this thought, your talent, your dedication and commitment brought you here, now you have a chance to become true Olympians. That honour is determined not by whether you win but by how you compete’

I love the sentiment, I love how everyone interviewed in the first couple days have talked about the success being in making it to perform at the Olympics, even people who have not qualified for further action.

Yesterday was the first full day of Olympics action and it was also the day that my Dad’s bestmate’s daughter got married. He and Mum received their invite to the wedding months ago, none of us thought Dad would be around for it as at the time he was seriously ill. A couple weeks ago Dad’s chemo was stopped, so I was stood down as Mum’s reserve date and the hope was that he would make it himself. This was really important for him and definitely something that he wanted to do. I spoke to my parents yesterday morning and they were all set for the wedding, Dad was still very tired and not feeling one hundred percent but he was up for it.

An hour later I got a phonecall from Mum; Dad had been sick. This is a relatively new development for Bobby, even throughout his chemo he has been nauseous but not suffered from vomiting. Yesterday wasn’t the first time that it had happened, although it was his worst episode and it completely wiped him out. Mum was in a little bit of a panic, she was torn between attending the wedding or staying home with Dad, she was calling to ask whether I’d come over and stay with him. My Saturday plans were shelved and over to the folks I went.

Bobby was looking really quite rough when I got there, but him and I both played it down until Mum had gone – at which point we had an honest conversation. He is concerned that the tumour is growing, it has started bleeding again, he knows that there is nothing more that can be done and I think he is a little bit scared. That said, he was also just exhausted. Bobby was packed off to bed and I settled down to watch the Olympics. 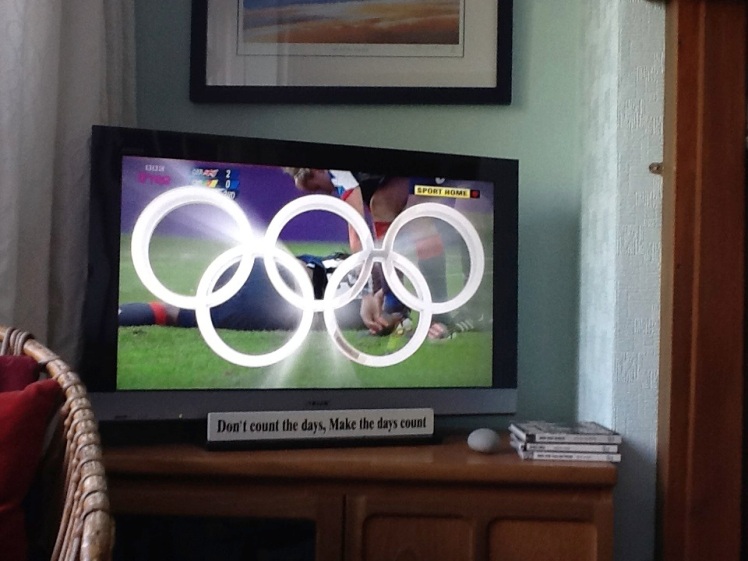 I was so grateful that there was something so engrossing and engaging on TV to take my mind off things. Later on that afternoon Dad surfaced and we spent hours watching the coverage together. We were armchair pundits of the highest standard, Olympic standard in fact.

As I sat thinking about the dedication, effort and hours of fighting that these athletes put into making it to the Olympics, I can’t help but draw parallels to my Dad’s last five years, the effort and hours of fighting. As the sign in front of their television proclaims ‘Don’t count the days, make the days count’, Dad may not be training for an Olympics, but I thought Jacques Rogge’s words were equally applicable, it’s not whether you win in the end, it’s how you compete.

2 thoughts on “Don’t count the days, make the days count”