Last week I attended the National Children and Adult Services Conference #NCASC in Eastbourne – I’ll blog about the session I ran later this week, but one of the things that struck me as a theme throughout the conference was the simple things that we could do to make people’s lives easier. I attended a session by Staffordshire County Council talking about some of their new approaches to providing support for people to live independently. It was a good session, I enjoyed the format – using short video clips to myth bust people’s assumptions. That said the thing I took away was the story of the automatic pill dispenser and the impact it had on one of the presenter’s (Emily I think?) grandparents – not high tech, not wifi enabled or encrypted or multidisciplinary, just plain and simple battery operated brilliance.

There were a handful of people who use services at the conference offering their perspective and not too surprisingly none of them were too fussed where their support came from, whether it was health or social care, but they all wanted to live as independently as possible. While I was at #NCASC my Dad was staying in our local hospice, he is terminally ill with bile duct cancer and had been admitted the week before I went away. One of the hardest things to witness is the impact that Dad’s illness has had on his and mum’s independence. I completely related to the story of the pill dispenser and the simple positive impact it could have. 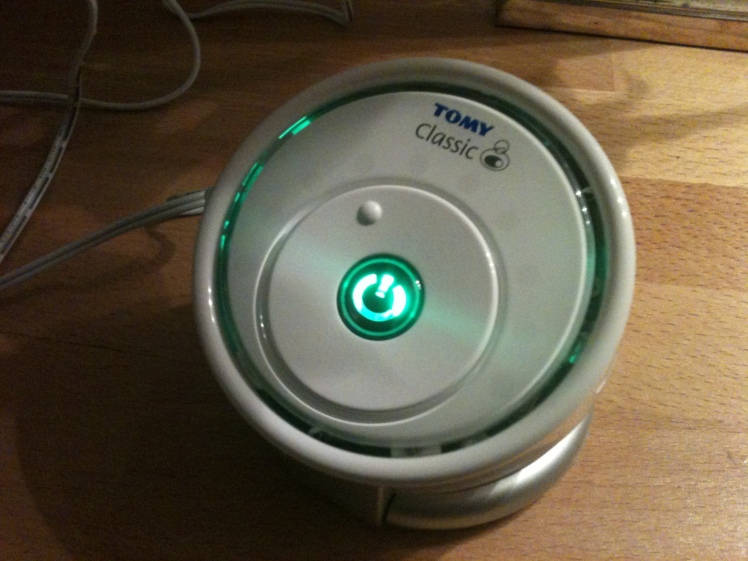 This nifty little device allows Dad to be in bed upstairs and whoever is looking out for him to carry on as usual elsewhere in the house – and yet to be tested but hopefully in the garden or next door with Gran.  Mum bought the monitor from Boots this afternoon and Dad was quick to road test it and request a cuppa tea from me earlier, complete with sarcastic comment about whether I’d gone to India to pick the tea when it wasn’t delivered quick enough. He also massively enjoyed making animal noises and scaring the life out of my Mum when she came home – it was one of the first times in a while I’ve heard him laugh, so it was worth it just for that.

It will also be interesting to see whether it allows Mum to sleep easier tonight knowing that she doesn’t need to be listening out for Dad. That said we’ll only truly tell with time, I’m staying at the folks tonight (my brother was there last night) but I’m keen to only stay one night if I can help it…so hopefully the monitor will make that a little easier. We’ll see. Next time I’ll discuss the power of Skype and/or the wifi picture frame, but for now all credit to the baby monitor!

5 thoughts on “Technology for living”