It’s been a month since I’ve blogged about anything other than Dad, death or dying. So I thought it was time to share some other random experiences and some photos from my holiday.

In terms of context, I finished work shortly after Dad died (a month ago), and the overwhelming feeling was one of exhaustion. This quickly gave way to the realisation that I had a newfound freedom, a lack of responsibility, very few stressors, routines or preoccupations to worry about. We had been hoping for a holiday in October/November but once I’d resigned and knew that Dad’s health was on another decline any plans of travel were shelved. We decided to grab the opportunity of a commitment in Stockholm to build a holiday around and bought interrail tickets the same week as Dad’s funeral, which took place on a Thursday with us leaving the following Wednesday. The next few posts will document some of the highlights so far, but in a nutshell we’ve trained our way around Europe managing to sample the Eurostar, Belgium, German, Danish and Swedish trains. There’s been loads of snow, culture, christmas markets, hostels, adventures, and photos.

First stop was Brussels. I’ve wanted to travel on the Eurostar for years and it was quite exciting and completely seamless. Brussels itself was kind of meh! Don’t get me wrong it had some good bits, the Comic Strip Museum was well worth a look at and the waffle was super, but I wasn’t really feeling it. That could have been nothing to do with Brussels but it sort of added to my stress, didn’t remove it. It felt quite haphazard as a city, which is normally something I quite like, but it felt like it was missing a magical something. I suspect that Brussels would grow on me but it didn’t grab me.

There were a couple of highlights in our 24 hours, one was the restaurant we found out in the district were our hostel was and the other was a parade we stumbled across. The restaurant was really out of keeping with the area, it was a complete lucky discovery courtesy of a 4 square check in <the next time someone asks me what the point of #4sq is I’ll be offering this culinary example>. We’d been for a couple of beers and had been struck by how revolting bars are where people still smoke. One of the bars sold pot noodles as their food offering, the other peanuts – you get the culinary level we’re talking about, then out of nowhere there was this lovely French restaurant Chez Soje. We were the only customers, I don’t think Wednesday night would be their busiest but the food was amazing. If you’re ever in the area then it’s well worth a try.

The next day we went for an amble around Brussels, visiting our first Christmas market of the trip, spotting an impressive Christmas installation in the beautiful square:

Then we had to swing by the peeing man, Mannekin Pis, who was dressed as Santa – a tiny bit surreal:

and it just got a little more random as we walked past what google suggests was the St Nicolas/Sinterklaas parade – which to all intents and purposes looked like a bunch of students having a carnival and drinking in the street, while the police closed the traffic down and ensured they did so safely:

and the main man himself: 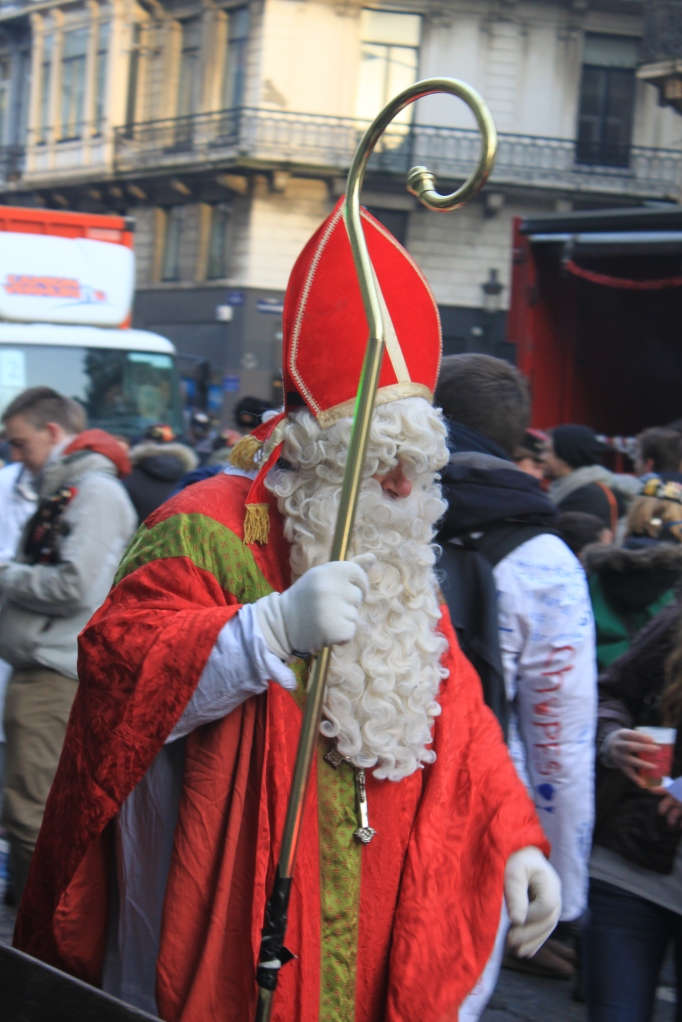 Next stop was Cologne so keep your eyes and ears peeled!